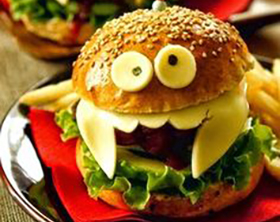 When I promised my son a bogey burger, I thought there was an understanding that I neither have the sufficient stock of bogies to actually make the burger and that even if I did I would not actually give it to him.

So when he and his friend came for their much planned dinner (which seemed to require the type of cross-parental co-ordination normally reserved for an SAS mission), they were presented with chicken nuggets rather than the much vaunted green patties and as soon as I placed that beige feast in front of them, I could see their faces melt into disappointment as they looked on their feast a little like you’d view a pair of socks unwrapped on Christmas morning (useful but ultimately not what the gig is about).

‘Look, guys, bogey burgers, they’re not real,’ I said, covering my back.

Like being on the end of an argument you’re never going to win, the response came….

What made me make a promise to one so young and then so wilfully break it without missing a heartbeat? Am I becoming another lazy deadbeat dad that all of those Hollywood films have told me not to be? (Okay, let’s glaze over the fact that it was chicken nuggets for dinner and not hand reared avocado, free range broccoli and Greenpeace endorsed chicken breast).

It made me think about what we promise and what we deliver for our children. A passing word here, a phrase there, it might seem fleeting, but words stick and actions (or lack of them) are remembered.  I still recall being promised a fishing trip with my dad; the chance to play with the fantasy fishing rods I’d long admired in the pages of the Argos catalogue. It was a small promise, nothing major, just a few words said in passing and quickly forgotten – but one that was never fulfilled (I know, I need to get over it thirty years on).

The promise to my boy was easy to fix. Baked avocado on the next dinner menu (the better choice vs my initial idea of green iced burger) and chocks away, one happy kid (not that he ate it of course – he was never going to).

But what is a promise between a parent and child? When does it become a bond, a bind between two people? Should it be that a promise only counts when that child reaches the age of 18 and can understand the full weight of what a promise means?  Surely promising a bogey burger doesn’t count as a real promise?  Or does it? A child’s understanding differs wildly from that of the fully evolved version of the species, so who knows what weird logic goes through those little heads. Besides, I’m constantly let down by own child’s promises to me (he promised not to come into my bed in the night and steal the duvet  being the latest), so is it not fair that this is returned?

Sadly not, a promise in this arena is sacred because it is the first steps in teaching trust. Sure, a promise missed here or there can be explained away or usually resolved with a touch of green icing, but be careful how many you break, particularly if you want them to believe in your word. Next time I will be a little more careful in my language, replacing ‘promise’ with ‘we’ll do our best’ (surely the motto for any parent). And as a final thought, avoid bogey burgers this Halloween; there are easier and tastier gruesome food tips!