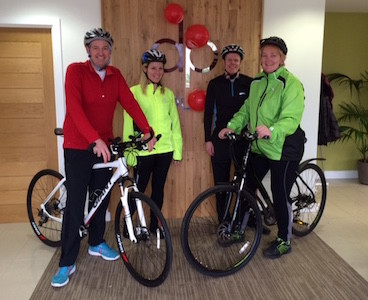 The UK fundraising event Sport Relief takes place once again in March this year – and the team at family entertainment centre operator 360 Play will be doing their bit to help raise money for this very worthy cause.

Managing Director Duncan Phillips will be joined by several members of the head office team at DP House in Milton Keynes for a sponsored cycle ride over a distance of 50 miles on March 20th. The route begins and ends at the Queen Elizabeth Olympic Park’s iconic Lee Valley VeloPark, part of the site of the 2012 London Olympic Games, and the 360 Play team will be hoping their efforts raise lots of money for Sport Relief.

Each team member will ride the 50 mile route and as well as funds being raised through individual sponsorships, 360 Play itself will be adding its own contribution to the pot!

Sport Relief has been running in the UK every second year since 2002 and of all the money raised by the public, 50 per cent is used to make a difference to people’s lives in the UK while the other 50 per cent goes towards transforming  lives across the world’s poorest communities. Just under £72m was raised through a wide range of sponsored events and activities in 2014.

“Supporting charities and the wider local communities in all the areas in which we operate is something we’ve done for a number of years,” explained 360 Play sales and marketing manager Billie-Jan Hills, “and when it was mentioned in the office that we should do something for Sport Relief this year the idea inspired quite a few of us. The 50 mile cycle ride is one of the official events organised by Sport Relief so we decided to have a go at that. We are doing some serious training so hopefully we’ll raise lots of money for this great cause.”

The 360 Play team’s admirable efforts also reflect the company’s philosophy as far as young children are concerned, in that the company believes strongly in providing fun activities designed to encourage physical, active, imaginative and creative play, enhancing and supporting children’s development. Its centres are filled with elements to ensure this is achieved among its young visitors who in being encouraged to enjoy physically active pursuits at a young age may one day themselves take part in a Sport Relief event.