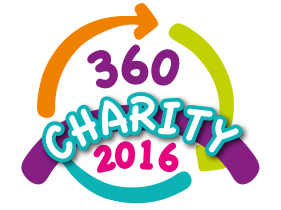 Children’s play centre 360 Play is looking to link up with another local children’s charity for 2016 to help support the chosen organisation over a 12 month period as its ‘official’ Charity for the Year.

We are already very active in our local communities, donating over 700 family passes to raffles this year alone. Each year we choose one special children’s charity to become our Charity of the Year and they get our special focus and attention during that period.

360 Play will work with the chosen charity on a variety of fundraising initiatives which could include charity events held by 360 Play itself, with profits going to the supported organisation, the use of the 360 Play premises for a fundraising event and the provision of raffle prizes for further fundraising activities, among others.

So, if you are involved in a local charity and would like to register your organisation’s interest in becoming 360 Play’s officially supported charity for 2016, please email communitytickets@360play.co.uk in the first instance, stating the reasons why you feel your charity should be considered and also including a contact name, telephone number and details of fundraising achieve to date. Photographs would also be welcome. The last day for receipt of applications is Friday, December 18th.

Nativity plays – What do you mean my child’s not Joseph?
Scroll to top