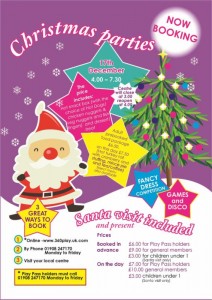 The 360 Play PARTY WITH SANTA event is on Wednesday the 17th December this year.

Come along and join in some festive fun and games.

We will have a Christmas disco,  games, a fancy dress competition and seasonal crafts available throughout the evening and of course Santa will be visiting to give all the children a pressie.

A hot snack box with the choice of hot dog, chicken nuggets/veg nuggets, fish fingers and a dessert is included in the entry price.

To book online please click on the Centre link below:

Booking in advance is advised and prices are as follows:

On the day subject to availability:

Hot turkey roll with cranberry and stuffing, mince pie and a Hot Beverage

All adult entry will be FREE of charge – and the bar area will remain open until 7.00 offering a small select seasonal menu

360 Play is once again offering visitors to its children’s entertainment centres some Halloween fun and games with our annual ‘Halloween Spooktacular’ event.

Our ‘Halloween Spooktacular’ is a ticketed event and visitors are advised to book in advance as there are no guarantees that tickets will be available on the night.

Even though it’s Halloween, a warm, friendly welcome is assured and as well as all the extra special activities taking place during the evening, the familiar 360 Play range of fun and creative play activities will be on offer for youngsters to enjoy, including the three storey play structure, 360 Street, the carousel, dodgem cars and much more. 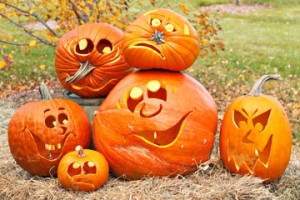 360 Play’s three children’s play centres in Milton Keynes, Stevenage and Leicester are each looking to link up with a local children’s charity to help support the chosen organisations over a 12 month period as their official charity for 2014/15.

360 Play venues are popular destinations for families with young children and feature a wide range of fun activities designed to encourage children to be physically active as well as to learn as they play.  And as a way of supporting their home cities and getting further involved with the local communities in which they are situated, each centre is now again looking to become involved with one of the many children’s charities based in their localities.

“Our first experience in linking with local charities began in 2013 and we have worked with one in each area over the past 12 months or so,” noted Adam Skinner, 360 Play’s business development manager. “With the period for these arrangements now at an end we’d like to continue with this initiative and are looking for other children’s charities who feel 360 Play could help with their fund raising and other activities to put themselves forward for consideration as our next official charities.

“As a family orientated business providing high quality fun, active, learn-through-play opportunities for families with children aged two to 12, we want to be involved in the local community in various ways and would like to continue with our charitable support. It’s a natural fit with what we do and we feel we have lots to offer whichever organisation we might link up with.”

Adam noted that 360 Play would work with the chosen charities on a variety of fundraising initiatives which could, he said, include charity events held by 360 Play itself, with a percentage of profits going to the supported organisation, the use of 360 Play premises for a fundraising event and the provision of raffle prizes for further fundraising activities, among others.

And as an example of the support 360 Play provides to numerous local groups and organisations annually in the three areas around the UK in which it currently operates, Adam added that during the past 12 months, as a group, the company has donated in excess of 1,100 raffle prizes and attended over 60 different events.

So, if you are involved in a local charity in Milton Keynes, Stevenage or Leicester and would like to register your organisation’s interest in becoming one of 360 Play’s officially supported charities for 2014/15, please email Andrew Mellor at andrewfmellor@aol.com in the first instance, stating the reasons why you feel your charity should be considered.

We have been working hard over the summer to create an outdoor area at Stevenage. We have created a compact area full of 360 outdoor fun. A large sandpit is enclosed by outdoor 360 Street with our quirky school house, cottage, police station and ice cream kiosk for the kids to have endless imaginary fun. With some nice seating and landscaped planters it all adds up to some fresh air and sunshine on a nice day.